Saalumarada 200km Brevet - A Ride with an out of true wheel!

It was a not-so-cold, but pretty warm day on 11th January, circa 2014. The Bangalore Brevets team was organizing a 200 km brevet that goes through the Saalu Mara (Row of Trees) laid by Thimmakka, in Hulikal village, Magadi Taluk. In case, you had not heard of Saalumarada Thimmakka, here is a small snippet about her from Wikipedia

Saalumarada Thimmakka (ಸಾಲುಮರದ ತಿಮ್ಮಕ್ಕ) is an Indian environmentalist from the state of Karnataka, noted for her work in planting and tending to 284 banyan trees along a four-kilometre stretch of highway.[1] Her work has been honoured with the National Citizen's Award of India.


The route for this brevet is given in the image below. The full google maps route is here.

Some one had shared an elevation map and this route had no climbs to speak off. I decided to do this brevet and aimed to finish with sufficient time to spare. The last 2 times, I had done a 200 km brevet, I had to race to the last control point and finished with just 15 minutes to spare. I wrote it about here and here. Before the brevet, I had talked with a friend (Bappi) and he had just bought a new road bike and we decided to meet at the starting point.

This time, I wanted to ride to the starting point and ride back home from the ending point (end point was about 19-20 km from my house). I did the basic ABC (Air, Brakes, Chain) check the previous day and filled the air upto 80 psi on both tires. I had read that keeping the air at maximum allowed psi is more efficient, but it will reduce the comfort. Since I want a more efficient machine, I always keep it at 80 psi on both wheels.

I started at 6.05 AM from the starting point and I was quite familiar with this route. It was a fairly straightforward route upto Ramnagara and I was riding with decent speed. We covered nearly 50 kms and reached the first control point at around 8.10AM. At this point, someone knocked my bike down accidentally while I had parked it. I thought no sweat and started. The moment I started, I realised that the front brakes are not working. I immediately got down, took out my multi tool and tightened it and I thought thats the end of all problems - little did I realise what was in store for me that day!

An Eventful Journey till Tumkur

A few kilometers from Ramnagara and I started hearing some noise from my bike. I tried to see what is the problem, I suspected something to be wrong with the front tire and was checking it. I also asked Bappi (another old biker friend with whom I rode most of the journey) to check the front tire. Both of us felt its fine and we moved ahead. But a few more kilometers towards Magadi, Bappi noticed that the problem is with my back tire - it was out of true (a bent wheel) and it was scraping the brake pads. I tried my best to adjust the brakes and started and pedaled a few more kilometers. But the problem did not go away. At this point, I took help from another biker called Deepak and he adjusted the brakes so that they were a bit loose, but did not touch the out of true back wheel. At this point, I was contemplating quitting because I had done only about 68 km and I was not sure if this wheel could take another 135 km. But Deepak said, it should not be a problem and said I should be able to finish the ride.

So I continued on this road. I was finding it a bit tough to ride the bike. Not sure whether the out of true wheel was actually slowing me down or my mind was playing tricks. Later, I googled and did not find any solid references that said riding a bike with out of true wheel is tough, so I am not too sure on this one .... We reached Magadi, had breakfast and proceeded towards the Row of trees. We finally reached the Saalu Mara (row of trees) and took a few snaps there and enroute.

I started to pedal hard and was constantly falling behind Bappi. Not sure if I was a little out of form or the faulty wheel was causing it. He continued to wait for me at various places and I caught up with him and we would proceed. Enroute, we found a beautiful big lake near a village called Honnudike. A couple of pics below. 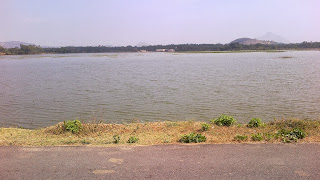 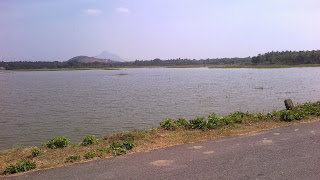 We originally planned to reach the Tumkur control by 2PM, but managed to reach there by around 2.10PM. We took our ATM slips and left by around 2.20PM. There was more than 5 hours to complete the last 65 odd kilometers and it seemed quite simple

The Last Leg sapped me!

The weather was incredibly hot and the sun was shining down on us mercilessly. We had a small pit stop at the Tumkur toll gate and started at 3.05PM. Bappi went ahead of me and I was finding it difficult to ride. Around 3.45PM I started developing cramps on my right leg and had to get down the bike. But it was the highway and there was no resting place or shade. I had to walk the cycle for about a kilometer so that my legs loosen a bit and the cramps go away. I was seriously contemplating quitting and taking a bus. But I reasoned that if I have decided to quit anyway, I ll try walking for some distance and try biking again. If there is no improvement, I can quit. But after the walk, I was able to cycle, albeit very slowly. I remember being very slow near Dobbespet. At this point, I could not help remember those childhood days when I would be taking the passenger train on this route and buy small sweats / jackfruits at Dobbespet. Anyway, after sometime, I felt better and continued to cycle. I was doing around18 to 20 kmph, which was still slow, but I could be afford to be slow, since I had time to the last point.

Continuously sipping on electrolytes, I managed to reach Nelagamangala. From here, I knew the adrenaline will kick in and I will pick up speed. This happened and I was doing my usual 23 - 25 kmph. Somehow I carried till the end point and reached at 6.39PM. It was a 12 hour 29 minute journey to cover a 202 kilometer journey. I wanted to finish without having to race to the last point and was glad that I was able to do it. I got the brevet card stamped, handed it over and called it a night! Some stats below